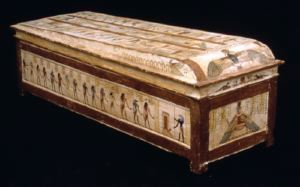 
This pair of nesting coffins once held the mummy of Pa-debehu-Aset, an Egyptian official from the city of Asyut, midway down the River Nile.

Pa-debehu-Asetâs mummy, now lost, would have been placed in the anthropoid, or human-shaped, coffin. The anthropoid coffin would have nested in and been protected by the rectangular outer coffin, called a shrine coffin because it resembles the sacred shrine of a god. Both of Pa-debehu-Asetâs coffins are decorated with images and symbols of the gods, goddesses, spells and prayers that would guide his soul into the afterlife.

Like all ancient Egyptians, Pa-debehu-Aset believed that the mummy was the eternal dwelling place for the spirits of the deceased. The divine powers of gods and goddesses would protect him during his life and after his death. Because of its human shape, the anthropoid coffin could serve as a substitute body should Pa-debehu-Asetâs mummy be destroyed.

Provenance
Private collection, Lucerne, Switzerland; purchased from that owner by the family of Dr. Andre P. Lagneau, Neuchatel, Switzerland, ca. 1970; purchased from Dr. Lagneau by Francis Wilhelm, Geneva (dealer); purchased from him by Antiquarium, Ltd., New York (dealers); purchased from them by the Gallery, 2000
Keywords Click a term to view the records with the same keyword
Egyptian
1000 BCE - 500 CE
funerary objects
coffins & sarcophagi
Additional Images Click an image to view a larger version

Inner Coffin of Pa-debehu-Aset
2000.11.2
Portfolio List Click a portfolio name to view all the objects in that portfolio
This object is a member of the following portfolios:
1000 BCE - 500 CE
All Decorative Arts
Ancient Egyptian Art
Egyptian Art
Lesson Plans Using MAG Objects
MAG Favorites
Objects with Lesson Plans for ELA Standards
Objects with Lesson Plans for SS Standards
Passport to the Past
Web Links See links to web pages and lesson plans
Protected for Eternity: The Coffins of Pa-debehu-Aset, Gallery Guide Explore the world of Pa-debehu-Aset, and the sacred stories that relate the Egyptian journey to the afterlife. Learn how a mummy is made, and explore reading and writing in ancient Egypt.
Passport to the Past A Tour of the Ancient, European and Asian Collections of the Memorial Art Gallery.

Your current search criteria is: Object is "Shrine Coffin of Pa-debehu-Aset".