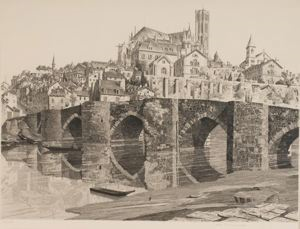 John Taylor Arms was first trained as an architect, and went on to become the leading American printmaker of the first half of the 20th century. In 1934, Arms demonstrated âThe Making of an Etchingâ at one of his many appearances before the Print Club of Rochester. He is best known for his detailed etchings of Gothic and medieval architecture.

In 1923, Arms began an ambitious project of drawing and etching the great cathedrals and churches of Europe. Limoges is one of his French Churches series featuring Saint-Ãtienne Cathedral, constructed between the 12th and 16th century. The view depicts the Vienne River and the mountainous landscape of the Massif Central region of France.

Your current search criteria is: Object is "Limoges".