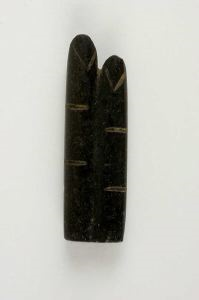 The two-fingers amulet represents the fingers of Osiris and symbolizes his protective and healing powers. Priests placed this amulet near the incision used for removing the mummyâs internal organs because it would magically heal the wound.

Exhibition List
This object was included in the following exhibitions:
Portfolio List Click a portfolio name to view all the objects in that portfolio
This object is a member of the following portfolios:
Ancient Egyptian Art
Egyptian Art
Web Links See links to web pages and lesson plans
Protected for Eternity: The Coffins of Pa-debehu-Aset, Gallery Guide Explore the world of Pa-debehu-Aset, and the sacred stories that relate the Egyptian journey to the afterlife. Learn how a mummy is made, and explore reading and writing in ancient Egypt.

Your current search criteria is: Object is "Two-Fingers Amulet".