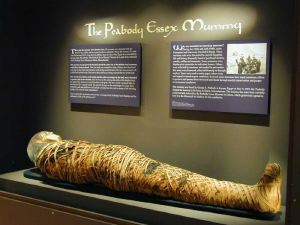 
This is the mummy of a man who died around 50 CE, when Roman rulers controlled Egypt. Found by George A. Peabody in Fayum, Egypt on May 9, 1901, the mummy belongs to the collection of the Peabody Essex Museum in Salem, Massachusetts.

Priests wrapped his body in strips of linen, now discolored by the resins and ointments used during mummification. The painted designs on his coverings show protective gods and goddesses, including a winged sun disc and the kneeling goddess Nut. The gold of his mask indicates his ascendancy into the realm of the gods. His hair, painted blue, is decorated with a winged scarab.

Exhibition List
This object was included in the following exhibitions:
Portfolio List Click a portfolio name to view all the objects in that portfolio
This object is a member of the following portfolios:
Ancient Egyptian Art
Egyptian Art
Web Links See links to web pages and lesson plans
Protected for Eternity: The Coffins of Pa-debehu-Aset, Gallery Guide Explore the world of Pa-debehu-Aset, and the sacred stories that relate the Egyptian journey to the afterlife. Learn how a mummy is made, and explore reading and writing in ancient Egypt.
A MAG-nificent Specimen Curators from the Memorial Art Gallery and scientists from the University of Rochester Medical Center team up to study a 2,000-year-old mummy.

Your current search criteria is: Object is "Mummy".