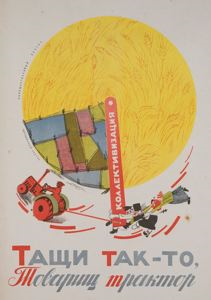 That's the Way to Till, Comrade Tractor!
The letter ၘ from The Anti-Religious Alphabet

In the Russian countryside, the kulak, or wealthy landowner, the village priest, and elderly peasant women who persisted in their religious beliefs were considered the three holdouts to both the Soviet anti-religious campaign and the move toward collective farming and industrialization. Here, despite the three characters' attempts at restraining the tiller, the tractor going around the circumference of the circle clears the kulak's land of individual plots, replacing them with a single one filled with golden wheat. The word "collectivization" is written on the tiller.