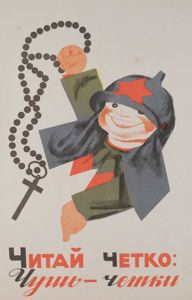 Read it Loud and Clear! Rosaries are Rubbish!
The letter Ч from The Anti-Religious Alphabet

Like the rosaries of Roman Catholicism, the chotki, or prayer ropes, of Russian Orthodox Christianity are strings of beads used by the religious faithful to recite a series of predetermined prayers. Because of the Western rather than Orthodox cross on the end of the beads, this image could refer to the Roman pope's mandate for Catholics to say the Rosary "for the conversion of Russia," which was seen as a symbol of western aggression by the Soviet anti-religious campaign.