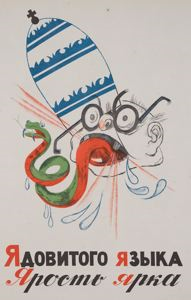 Pope Pius XI, the leader of the Catholic Church at the time Cheremnykh designed The Anti-Religious Alphabet, was openly critical of the atheistic doctrine of the Soviet Union. He condemned communism as the most persistent enemy of Christianity, calling it a "satanic scourge" from which the common man must be saved. The pope was seen as a grave threat to Soviet society; this image presents Pius XI's words as a writhing, dangerous snake waiting to strike.