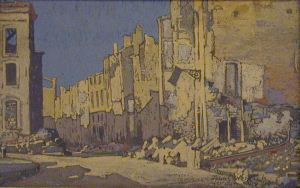 
Object Type: Watercolor
Medium and Support: Gouache with graphite on paper
Credit Line: Gift of John A. and Jeanne P. Wenrich
Accession Number: 2003.50
Link to this object
Location: Not currently on view