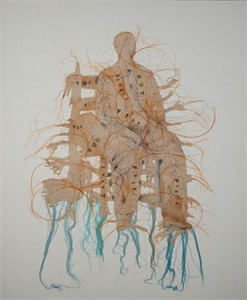 
In Homage to F.K.#2, Lesley Dill was inspired by two creative and enigmatic artists: Mexican painter Frida Kahlo (1907 â 1954) and American poet Emily Dickinson (1830 â 1886). With cloth and thread, Dill recreated Kahloâs bitter self-portrait in which Kahlo depicted herself after cutting off her hair in anger to punish her unfaithful husband, Diego Rivera. On layers of tea-stained linen, Dill applied lines from a 19th century poem by Emily Dickinson, whose words hit the artist âemotionally, like a thunderboltâ upon first reading the book of poetry she received on her birthday from her mother:

You cannot put a Fire out --
A Thing that can ignite
Can go, itself, without a Fan --
Upon the slowest Night --

While Kahlo and Dickinson were women who were clearly passionate about their art, Homage is layered with ambiguities. The flowing threads suggest hair as well as fire and water; the delicate feminine stitchery delineates a woman known to have been bisexual, whose self-portrait is decidedly masculine.

Your current search criteria is: Object is "Homage to F.K. #2".