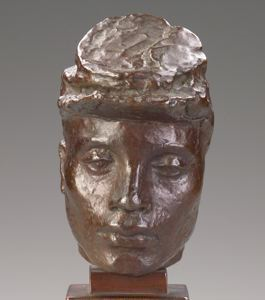 
Object Type: Sculpture
Medium and Support: Bronze on wood base
Credit Line: Gift of Richard Brush and Maurice and Maxine Forman Fund in honor of the 20th year of Grant Holcomb's directorship
Accession Number: 2006.10
Location: Currently on view
Link to this object


In 1989, Matthew Broderick starred in the film "Glory," based on the life of the abolitionist Civil War hero Robert Gould Shaw. He led the first northern regiment of African American soldiers, which included the two sons of Frederick Douglass, Lewis and Charles. 25-year-old Shaw and 270 of his men from the 54th Massachusetts regiment died in an attack on Fort Wagner in South Carolina on July 18, 1863. Confederate soldiers buried them in a mass grave, blacks and whites together, which was considered at that time to be an insult to a white officer.

In 1897, a sculpture was dedicated in Boston in memory of these heroic individuals. In the early stages of the memorial's creation, distinguished sculptor August Saint-Gaudens made plaster models of the soldiers' heads. Several of these were later cast in bronze in a very limited edition, from which the Memorial Art Gallery recently acquired two rare examples. (See also 2006.9)

Provenance
Private collection, Connecticut; James Graham and Sons (dealers), New York; purchased from them by the Gallery in 2006
Additional Images Click an image to view a larger version

Bibliography
This object has the following bibliographic references:
Portfolio List Click a portfolio name to view all the objects in that portfolio
This object is a member of the following portfolios:
19th Century American Art
All Sculpture
Web Links See links to web pages and lesson plans
MAGexplore MAGexplore provides in-depth information and close looking at over 200 objects in MAG's collection.

Your current search criteria is: Object is "Study for a Soldier's Head, Robert Gould Shaw Memorial".