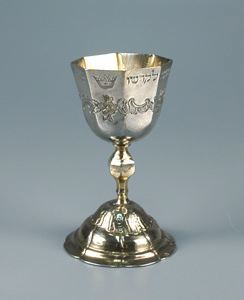 Kiddush is a blessing of sanctification said over wine during Sabbath and festival celebrations. A text from the Book of Exodus (20:8), "Remember the Sabbath Day and Keep It Holy," is inscribed in Hebrew around the rim of this Kiddush cup. Interspersed with the biblical text are three crowns that refer to a traditional proverb: "There are three crowns-- the crown of Torah, the crown of the priesthood, and the crown of kingship, but the crown of a good name exceeds them."

Provenance
Central Synagogue, New York, NY; purchased from them by the Gallery in 2006
Keywords Click a term to view the records with the same keyword
kiddush cups
judaica
Additional Images Click an image to view a larger version

Your current search criteria is: Portfolio is "Metalwork" and [Object]Nationality is "German".