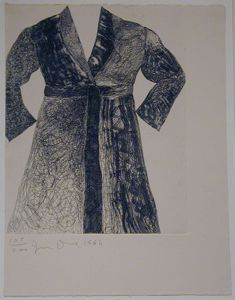 
From the portfolio "New York Ten"

This work claims to be a self-portrait, although we don't actually see what we typically expect in a portrait - a face. One of the trademarks of Pop Art is the absence of the artist's hand - many of them wanted their work to look machine-made or mass-produced. Pop Art, as well as many other art movements throughout the ages, often prompted the question "What is art?" This work also invites the question "What is a portrait?"

The self-portrait has been redefined by a number of artists in contemporary times. In Dineâs case, the substitution of a bathrobe for the artistâs face is a witty twist on an old theme, simultaneously conveying anonymity and âcozy familiarity,â in the words of one writer. Like Warholâs Campbellâs soup can, Dineâs bathrobe has become a signature image of Pop art of the Sixties.

In addition to his unconventional approach to self-portraiture, Dineâs printing technique âbreaks the rulesâ as well. Rather than being centered on the paper, the image is asymmetrically placed, which creates a cropped effect.

Exhibition List
This object was included in the following exhibitions:
Bibliography
This object has the following bibliographic references:
Portfolio List Click a portfolio name to view all the objects in that portfolio
This object is a member of the following portfolios:
1900 - 2000
All Graphic Arts
Charles Rand Penney Collection
Dimensions in Pop
Intaglio Prints
Men
Portraits
Self-Portraits

Your current search criteria is: Related to "Jim Dine" and [Object]Object Type is "Print".