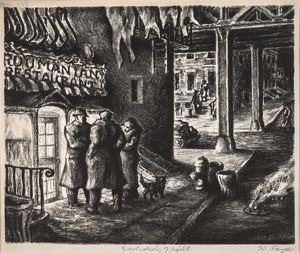 
During the many hours that Harold Faye spent exploring New York City and recording its dens and denizens, he created work that demonstrated âenthusiasm of place and period,â in the words of one art historian. In East Side, Night, he emphasized the cityâs hard metallic elements â the fire escape, the sturdy supports for the El, railings, cars, barrels â but tempered them with the softness of the lithographic crayon.

Off and on during the Depression, Harold Faye found employment with the Graphic Division of the Federal Art Project of the Works Progress Administration. This government agency was set up as part of the New Deal to create jobs. Typically, artists submitted drawings to supervisors who would either approve them, in which case the artists would go ahead and print multiple copies, or the work would be disapproved and shelved or discarded. Nearly 4,000 artists were given work thanks to this program, including Jacob Lawrence, Mark Rothko, and Jackson Pollock.

Your current search criteria is: Object is "East Side, Night".