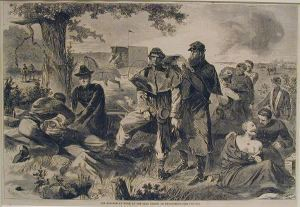 
Winslow Homer, who became one of Americaâs major painters, brought the Civil War to the home front with his illustrations in Harperâs Weekly magazine. With this engraving in the July 12, 1862 issue appeared the following commentary about the heroic role the surgeon played in the war:

The âSurgeon at Workâ introduces us to the most painful scene on the battle-field. Away in the rear, under the green flag, which is always respected among civilized soldiers, the surgeon and his assistants receive the poor wounded soldiers, and swiftly minister to their needs. Arteries are tied, ligatures and tourniquets applied, flesh wounds hastily dressed, broken limbs set, and sometimes, where haste is essential, amputations performed within sight and sound of the cannon. Of all officers the surgeon is often the one who requires most nerve and most courage. The swaying tide of battle frequently makes him a prisoner, and sometimes brutal soldiers will take a flying shot at him as they pass.

Your current search criteria is: Object is "The Surgeon at Work at the Rear During an Engagement".