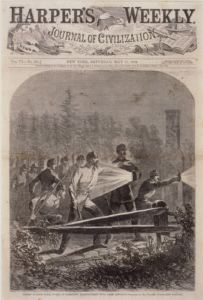 
Many of Homerâs illustrations for Harperâs Weekly magazine, like this one from May 17, 1862, were based on sketches inspired by his personal experiences. His mother wrote, âWinslow went to the war front of Yorktown and camped out about two months. He suffered much, was without food 3 days at a time, & all in camp either died or were carried away with typhoid feverâplug tobacco and coffee was the Staplesâ¦.He came home so changed that his best friends did not know himâ¦â.

Journalist Steve Mumford wrote one hundred and fifty years later: âWhat I found moving about Homerâs work was that it wasnât directly about the morality of the Civil War, so much as it sought to recreate the experience of the soldiers. His art rarely read as propaganda. It showed the powerful bonding among men on the front lines, as well as the terror. Homer had experienced it and drawn it.â [Gallery label, February 21, 2012]

Your current search criteria is: Object is "Rebels Outside Their Works at Yorktown Reconnoitring [sic] with Dark Lanterns".