The Advance Guard of the Grand Army of the U. S. Crossing the Long Bridge 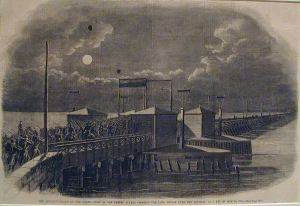 
Winslow Homer brought the Civil War to the home front with his illustrations in Harperâs Weekly magazine, including this one from June 8, 1861, shortly after the fighting had begun. The following commentary about the crossing from Washington, D.C. to Alexandria, Virginia appeared in the June 8, 1861 issue:

The scene at the bridges was grand and impressive beyond descriptionâ¦The night was cool and clear, thousands of men were drawn up in a line and defiling past, but hardly a whisper was heard from among them. They all preserved a solemn silence, as though sensible of the momentousness of the occasion; but the rumbling of artillery, the clatter of cavalry, the muskets and ordnance glittering in the moonlight, the suppressed commands of the officers, imparted, nevertheless, a liveliness to the imposing spectacle.

Among the groups of soldiers making the crossing were regiments from New York State. [Gallery label, February 21, 2012]

Your current search criteria is: Object is "The Advance Guard of the Grand Army of the U. S. Crossing the Long Bridge".