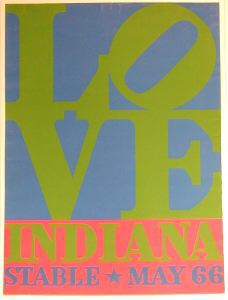 In 1964, Mr. Indiana designed the ''Love'' graphic for a Christmas card for the Museum of Modern Art. The logo took off, and in May 1966 he had a show of variations on the theme at the Stable Gallery in Manhattan.

The graphic became central to the 1960's visual vocabulary, appearing on clothes, jewelry, towels and rugs. The 1973 postage stamp with the logo was one of the best-selling stamps ever, the first of the US Postal Service regular series of âlove stamps.â

Mr. Indiana said he received only $1,000 for the design. (He had failed to copyright the logo, and so did not profit as it appeared on countless coffee cups and T-shirts.) The logo did not endear Mr. Indiana to the art establishment, and his star faded in inverse proportion to the success of ''Love.''

Exhibition List
This object was included in the following exhibitions:
Portfolio List Click a portfolio name to view all the objects in that portfolio
This object is a member of the following portfolios:
1900 - 2000
All Graphic Arts
Dimensions in Pop
Screen Prints & Non-Prints
Serigraphs

Your current search criteria is: Object is "Love".