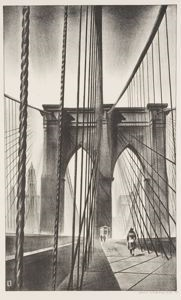 
Lozowick emphasized the Brooklyn Bridgeâs verticality by his dramatic treatment of the cable lines. Also, in the juxtaposition of the human forms with the bridgeâs monumental tower, the impact of its sheer mass is heightened.

The Brooklyn Bridge opened on May 24, 1883, after thirteen tumultuous years of work to complete the plan originated by John Roebling. It fulfilled the prediction that he offered in his original proposal:

"The contemplated work, when constructed in accordance with my design, will not only be the greatest bridge in existence, but it will be the great engineering work of the Continent and of the age. Its most conspicuous feature - the great towers - will serve as landmarks to the adjoining cities, and they will be entitled to be ranked as national monuments. As a great work of art, and a successful specimen of advanced bridge engineering, the structure will forever testify to the energy, enterprise, and wealth of that community which shall secure its erection."

Your current search criteria is: Object is "Brooklyn Bridge".