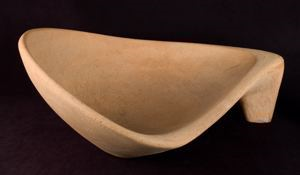 
After receiving his MFA in ceramics from Alfred University in 1949, Robert Turner was offered a position at Black Mountain College. There, he built a kiln and developed a studio pottery program, a focus that had not been emphasized under Josef Albersâ leadership. He recalled this time at Black Mountain College as ânot a time of discovery so much as a consolidation of what I had learned.â

With so much time needing to be spent on administration, Turner felt frustrated at his inability to focus on his own work. By 1951, he left North Carolina and returned to Alfred, where he later joined the faculty at the University. He later said âBlack Mountain was never a part of me at the time...It was only later that I realized something new was occurring in a social sense and in an art sense.â

Exhibition List
This object was included in the following exhibitions:

Your current search criteria is: Object is "Bird Bath".