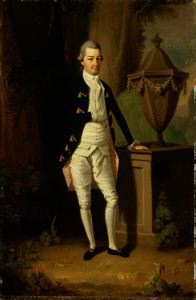 
This portrait was attributed to the German artist Johann Zoffany when it was acquired by Memorial Art Gallery in 1966. Prompted by MAG director Harris Prior, Smithsonian curator Robert Stewart investigated further and came to the conclusion that the American-born portraitist Henry Benbridge was the true artist. Shortly thereafter, this portrait was loaned to an exhibit of Benbridgeâs work in the National Portrait Gallery in Washington, DC. Stewart described it as âone of the nicest of what I call his âportraits in the small.ââ The elongated forehead, proportionately small body, and decorative plant matter in the foreground are hallmarks of Benbridgeâs style.

Provenance
Mrs. E. R. Wood, Toronto, Canada; given to Lilian Campbell Wood; to her sister, Jean Campbell Cameron in 1958; to her daughter, Agnes Cameron Holt, Avon, NY in 1965; purchased by the Gallery in 1966
Keywords Click a term to view the records with the same keyword
American art
portraits
men
paintings
Additional Images Click an image to view a larger version

Your current search criteria is: Object is "Portrait of a Man".