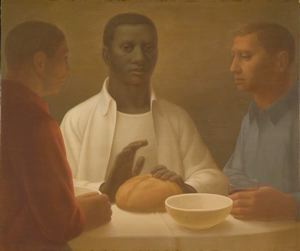 
Supper was one of George Tookerâs âprotest paintings.â Inspired by the work of Dr. Martin Luther King, Jr., the artist chose the New Testament story of the supper at Emmaus to draw attention to the Civil Rights movement.

In the biblical story, Jesus appeared as a stranger to two disciples after the Crucifixion. The disciples invited him to supper and only when Jesus blessed and broke the bread did they recognize him. In a year of great strife and bloodshedâ1963 was marked by boycotts, the killing of African American civil rights activist Medgar Evers, and the bombing of a church in Birmingham, Alabama that killed four young African American girlsâTooker chose to voice his protest by depicting an African American man as the enlightened, peace-filled Jesus in the moment preceding the revelation of his identity.

Exhibition List
This object was included in the following exhibitions:
Bibliography
This object has the following bibliographic references:
Portfolio List Click a portfolio name to view all the objects in that portfolio
This object is a member of the following portfolios:
20th Century American Art
All Paintings
Wine and Spirit: Rituals, Remedies and Revelry

Your current search criteria is: Object is "Supper".