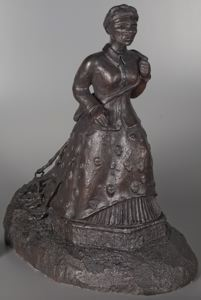 Take some time to look at this figure of a woman. Donât miss the roots that she trails behind her and the faces and objects that are scattered on her skirt. This is a portrait sculpture of Harriet Tubman, the heroic woman who escaped from slavery and yet returned to the South between 1849 and 1860 to lead over seventy slaves to freedom. In later years, she worked alongside Susan B. Anthony to advance womenâs right to vote.

Artist Alison Saar was commissioned to create a public sculpture of Tubman for a park at 122nd Street in New York City. MAGâs work is a maquette, or a smaller version. Saar represented Harriet Tubman as a person of great determination and strength, and positioned her as an oncoming train because of her reputation as âthe Moses of the Underground Railroadâ. Even her petticoat resembles a trainâs cowcatcher, pushing aside all obstacles in its path. Roots signify Tubmanâs efforts to uproot slavery, and the uprootedness of the slaves who had to leave everything behind. âSwing Lowâ is a Negro spiritual said to be one of Tubmanâs favorites.

Bibliography
This object has the following bibliographic references:
Portfolio List Click a portfolio name to view all the objects in that portfolio
This object is a member of the following portfolios:
21st Century American Art
Art by & About African-Americans
Artists of African Descent
Web Links See links to web pages and lesson plans
Frederick Douglass MAG webpage with links to Frederick Douglass and African-American experience resources at MAG
Swing Low : Harriet Tubman Sculpture Dedication Video of dedication of installation of another maquette of this sculpture at Scripps College.

Your current search criteria is: Object is "Maquette for "Swing Low".