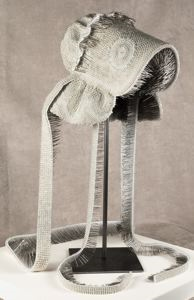 
Object Type: Sculpture
Medium and Support: 16,194 pearl corsage pins, steel, and fabric
Credit Line: Given in honor of Marion J. Hawks by her family, by exchange and Gift of Mrs. Nathaniel T. Whitcomb, by exchange
Accession Number: 2012.2
Location: Currently on view
Link to this object


Angela Ellsworth comes from a Mormon family, but she has rejected that tradition as ârestricted and oppressiveâ for women. Ellsworthâs great-great-grandfather was a nineteenth-century Mormon prophet. In honor of his twelve pioneer wives, Ellsworth made the first twelve prickly hats in her Seer Bonnet series. The round patterns in the surface design refer to the holes in the âseer stonesâ used by early male church leaders to receive revelations from God. For Ellsworth, âThe circles are my idea of giving the women wearing the bonnets their own visions.â

Ellsworthâs choice of corsage pins creates a threatening interior barely concealed by a beautiful exterior. The result is a wonderful and layered paradox. Here is a potent object that would empower and dominate the wearer just as it attracts and repels the viewer.