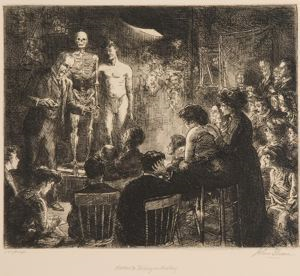 In 1905, shortly after Bellows arrived in New York to study painting, Robert Henri arranged a lecture at the New York School of Art by Thomas Anshutz, an instructor at the Pennsylvania Academy of Fine Arts. In attendance were a number of artists who would form the core of the urban realists led by Henri-among them George Bellows (standing, third from the right toward the upper right corner), John Sloan, and William Glackens. Sloan recorded the event in this etching.

Your current search criteria is: Object is "Anshutz Talking on Anatomy".