Turning Out the Light 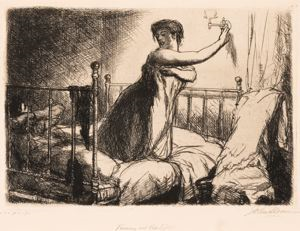 Turning Out the Light

For centuries, New York and Paris have shared a reputation as centers of vice and licentious behavior. While John Sloanâs tender print of a bedtime moment in a New York tenement seems far removed from the ubiquitous and explicit displays of contemporary sexuality, the image was firmly rejected for the American Water Color Societyâs 1906 exhibition as being âvulgarâ and âindecent.â

Sloan was part of a group of artists later called the Ashcan School, who did not shy away from subjects that other artists found unworthy or unattractive. Because so many of the artists, among them Sloan, had difficulty exhibiting their work due to their choice of subject matter and their idiosyncratic styles, they mounted their own exhibition in 1908 at Macbeth Gallery in New York City and were subsequently referred to as The Eight.

Your current search criteria is: Object is "Turning Out the Light".