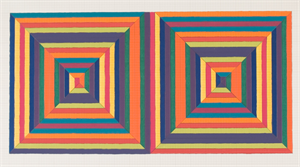 
The portfolio "Ten from Leo Castelli" was created to commemorate the tenth anniversary of the Leo Castelli Gallery in New York.

According to the Frank Stella Catalog Raisonne, "For this print Stella submitted a gouache based on the painting Fortin de las Flores of the Concentric Squares and Mitered Mazes Series (1962-63). A second version of this image (Cat. no. 84, 1973) was created by the artist as an offset lithograph for the four-part series Jasper's Dilemma."

Exhibition List
This object was included in the following exhibitions:
Bibliography
This object has the following bibliographic references:
Portfolio List Click a portfolio name to view all the objects in that portfolio
This object is a member of the following portfolios:
20th Century American Art
Charles Rand Penney Collection
Screen Prints & Non-Prints
Serigraphs

Your current search criteria is: Related to "Frank Stella".