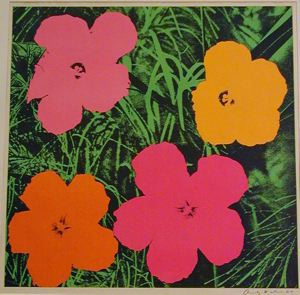 
Andy Warhol regularly appropriated imagery from other artists. Here, he based his image on a photograph of hibiscus flowers by Patricia Caulfield in "Modern Photography", June 1964.

Warholâs Flowers series was based upon a photo published in the June 1964 issue of Modern Photography taken by the magazineâs editor, Patricia Caulfield. Warholâs appropriation of images was to have an enormous effect upon later artistsâturn around to see Devorah Sperberâs appropriation of Grant Woodâs painting, American Gothicâbut it was not appreciated by Caulfield who threatened to sue Warhol when she saw his Flowers. Although Caulfield never filed a lawsuit, Warhol did pay her for the use of her photo.

Exhibition List
This object was included in the following exhibitions:
Bibliography
This object has the following bibliographic references:
Portfolio List Click a portfolio name to view all the objects in that portfolio
This object is a member of the following portfolios:
1900 - 2000
All Graphic Arts
Charles Rand Penney Collection
Flowers
Planographic Prints
Plants

Your current search criteria is: Object is "Flowers".