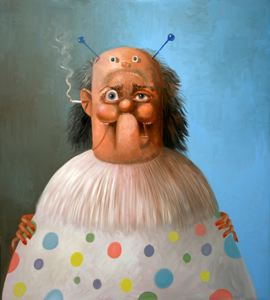 
George Condo emerged as a painter of influence in the early 1980s in New York. He was friends with Pop artists, having worked for Andy Warhol, and took to heart their fascination for popular, mundane, or âlowâ subjects. Condo realized that, if artists could borrow anything that already exists and make it their own, then why couldnât he borrow the entire history of art and call it his own?

Condo set out to learn as much as he could about painting styles and techniques from the Old Masters to the modern masters. For this painting, which, as he has said, looks a little like an âinsane Benjamin Franklin,â he has brought his knowledge of and passion for art history to bear on arguably the most lowly and banal of all picture subjects, the imaginary clown portrait.

Your current search criteria is: Object is "The Clown".