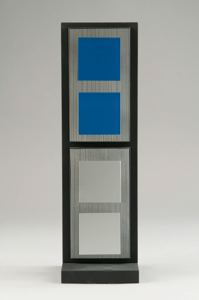 Focus on the squares that appear to float on the surface of this sculpture. Do they seem to move as your position changes?

The squares might seem to jitter, or move toward and away from you in rapid succession. In reality, all of the squares are static and placed the same distance from the base of the sculpture. Why might you perceive this movement?

The contrasting black and white lines on the base create this effect. As you move around the sculpture, your eyes continuously re-focus and re-adjust, each time capturing a slightly different image. One moment, the white lines frame the squares and the next, the black lines do. This sudden change in contrast creates a flickering effect and causes the squares to appear to pulse or jitter.

Exhibition List
This object was included in the following exhibitions:

Your current search criteria is: Object is "Jai-Alai".