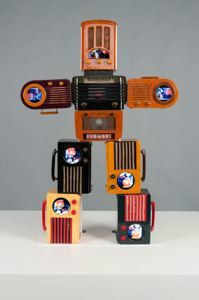 
Nam June Paik, often referred to as the âFather of Video Art,â studied music performance, art history, and Eastern philosophy in Korea and Japan before making New York City his home in 1964.
Paik expanded the language and materials of artmaking and was part of Fluxus, an international avant-garde art movement. Interested in electronic music and video manipulations, in 1964 Paik created a remote-controlled robot, Robot K-456, which he used in performances, often on the streets of Manhattan. This celebrated artwork spoke to Paikâs efforts to humanize technology, and it inspired his first âFamily of Robotâ sculpture, made in the 1980s and fashioned from a variety of antique televisions and radios.

Bakelite Robot, created late in life, is a signature work that addresses a variety of artistic and cultural issues: the human form in sculpture, the found object, technology and art, and the transformation of video into a sculptural medium.