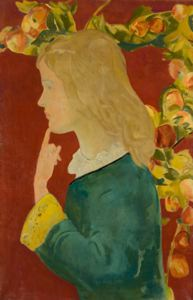 
Object Type: Painting
Medium and Support: Oil on canvas
Credit Line: Gift of the Estate of A. David Davies
Accession Number: 1967.7
Link to this object
Location: Not currently on view


Arthur Davies, born in Utica and educated at the School of the Art Institute of Chicago, was considered one of the greatest American artists during his lifetime. He was a primary force behind the organization of the pioneering 1913 Armory Show, which introduced the American public to avant-garde European art and helped change the course of painting and sculpture in the United States.

Although Davies experimented with different styles, mediums, and techniques, he always returned to the figure as the central element of his paintings. In much of his work he created a fantasy world into which the viewer could escape from the stress of an increasingly mechanized age. The women and children he painted are often placed either into idyllic landscapes that emphasize the innocent world he sought to recreate, or into a simple color background, as in Childâs Portrait, which permits the viewer to forget all but the purity of his subject.

Your current search criteria is: Related to "Arthur B. Davies" and [Object]Object Type is "Painting".