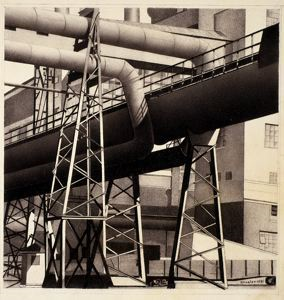 
In 1927, Charles Sheeler was commissioned to photograph Henry Fordâs River Rouge car factory outside Detroit to advertise the companyâs new Model A car. Fordâs innovations in the assembly line were celebrated for their efficiency, productivity, and ability to produce low-cost consumer goods. Yet the dark underside to this progress was unbearable, dehumanizing work conditions.

Ballet Mechanique, based on a photo from Sheelerâs Ford factory series, is a tightly-cropped scene of an industrial system of pipes and metal. By isolating the sleek machinery from actual labor, Sheeler elevates the loud, hot, dangerous factory environment to a cool, sleek, abstract vision of modernity.

Sheelerâs style, Precisionism, was a celebration of the technological sublime with its crisp, pure form and industrial themes. Of American artists in the early years of the 1900s, Charles Sheeler made one of the most dramatic breaks from the traditional assumption that beauty could be found in nature alone.

Your current search criteria is: Object is "Ballet Mechanique".