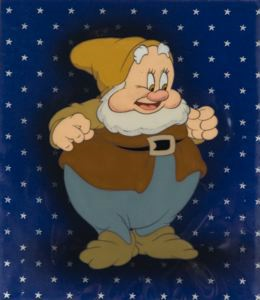 
Anne Cassebeer may have been MAGâs youngest donor of art. Nineteen years old when she donated Happy, she was a student at Pembroke College and the daughter of artist and architect Walter Cassebeer, a member of MAGâs board.

We wish we could tell you the story of how Anne came to own a production cel depicting Happy, one of the Seven Dwarfs but, as often happens, the circumstances were not recorded at the time she made the gift. A good deal more is known about the Walt Disney film, Snow White and the Seven Dwarfs, released in 1937. It was the first full-length animated feature film with an official soundtrack. MAGâs Happy was one of 1,500,000 drawings and watercolors that were photographed to create Snow White.

Provenance
Walt Disney Studios; Miss Anne Cassebeer; given to the Gallery in 1944
Keywords Click a term to view the records with the same keyword
American art
storytelling with art
1900-2000
drawing
figure
Additional Images Click an image to view a larger version

Your current search criteria is: Object is "Happy".