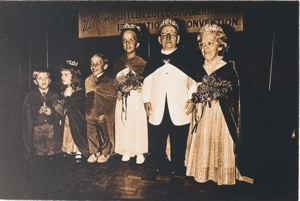 
The iconoclast photographer Les Krims, who has taught at SUNY Buffalo since 1969, has been the subject of both admiration and indignation. His staged tableaux, which he calls his âfictions,â have been influenced by Lenny Bruce, Rube Goldberg, Willem deKooning, and Peter Saul, among others. Much of his work has been an overt criticism of social documentary form and content. The portfolio from which this photograph comes was made over the course of two national conventions of the Little People of America. âThese people annihilated the stereotype of âdwarfâ delivered by art history and socially concerned photography,â Krims says. âI thought my pictures rightly showed them as normal people who possessed oversized amounts of strong, straight, American character, and much courage.â

Your current search criteria is: Object is "Winners of Little People of America King and Queen Contest".