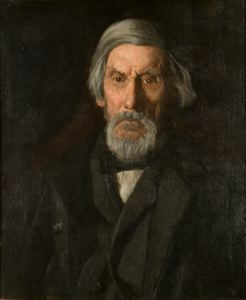 
Thomas Eakins painted multiple portraits of his father-in-law, William H. Macdowell. Eakinsâs sensitive portraits and genre scenes defined American realist art at the end of the 19th century. His art and commitment to realism were enormously influential to the artists of the Urban Realist movement.
[Gallery label text, 2007]

Thomas Eakins was one of America's greatest painters, whose realistic portrayals of people at work and at play have become icons of American culture. He immortalized many friends and family members by using them as subjects, among them his father-in-law, William Macdowell, an engraver and self-styled philosopher, whom Eakins painted and photographed numerous times. In the Gallery's portrait, Macdowell's aged face, rendered with scrupulous care and detail, emerges from a somber background. In this direct and straightforward manner, Eakins suggests Macdowell's strength of character and distinctive personality.

Your current search criteria is: Object is "William H. Macdowell".