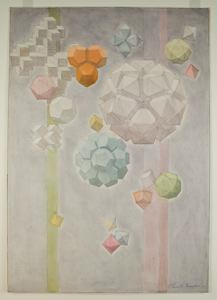 Your current search criteria is: Object is "Mathematical Abstraction No. 6 "Split complementary".