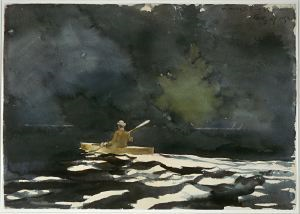 
The remote North Woods Club in the Adirondacks was a favorite retreat for Winslow Homer. There, he painted over a hundred oils and watercolors and found congenial friends, including 22-year-old Ernest Yalden, son of members of the club and the subject of this painting. Yalden recalled Homerâs interest in capturing the play of light flashing off the blades as he paddled his own self-built, light-weight canoe.

The year after Homer painted him in his canoe, Yalden graduated with a civil engineering degree and started a trade school in New York City for uneducated Jewish immigrants. He founded the Mineralogy Club of New York and trained men to be navigators during World War I. An authority on sun-dialing, he became an accomplished amateur astronomer who built an observatory in his back yard.

Exhibition List
This object was included in the following exhibitions:
Bibliography
This object has the following bibliographic references:
Portfolio List Click a portfolio name to view all the objects in that portfolio
This object is a member of the following portfolios:
1800 - 1900
19th Century American Art
All Paintings
It Came from the Vault: Rarely Seen Works from MAGâs Collection
Lockhart Collection
Seascapes
Seeing America
Web Links See links to web pages and lesson plans
Seeing America Inservice Materials from a teacher in-service presentation Spring 2008
Seeing America Chapter on Winslow Homer's Paddling at Dusk, written by David Tatham.
It Came from the Vault exhibition catalogue Entry for this artwork in the It Came from the Vault exhibition catalogue. The exhibition ran from March 17-June 9, 2013

Your current search criteria is: Portfolio is "Lockhart Collection" and [Object]Object Type is "Watercolor".