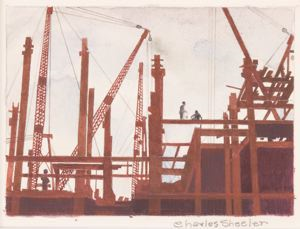 
This image of a New York City construction site is based on a film still from Charles Sheelerâs 1920 film collaboration with photographer Paul Strand, Manhatta. In the ten-minute film, the artists track the dynamism of Manhattan through the course of a day, focusing on the unique pulse and geometry of the cityâs machinery, vehicles, and architecture. Manhatta provided Sheeler with numerous images from which he later painted.

The title of this painting, Totems in Steel, frames modern engineering, industry, and architecture in quasi-religious terms. Sheeler wrote, âIn a period such as ours when only a comparatively few individuals seem to be given to religion, some form other than the Gothic cathedral must be found. Industry concerns the greatest numbersâit may be true, as has been said, that our factories are our substitute for religious expression.â

Exhibition List
This object was included in the following exhibitions:
Bibliography
This object has the following bibliographic references:
Portfolio List Click a portfolio name to view all the objects in that portfolio
This object is a member of the following portfolios:
1900 - 2000
All Paintings
Architecture
Cityscapes
Selected Sibley & Watson Family Gifts
Web Links See links to web pages and lesson plans
Manhatta: A Film by Paul Strand and Charles Sheeler In 1920 Paul Strand and artist Charles Sheeler collaborated on Manhatta, a short silent film that presents a day in the life of lower Manhattan. Inspired by Walt Whitman's book Leaves of Grass, the film includes multiple segments that express the character of New York. The sequences display a similar approach to the still photography of both artists. Attracted by the cityscape and its visual design, Strand and Sheeler favored extreme camera angles to capture New York's dynamic qualities. Although influenced by Romanticism in its view of the urban environment, Manhatta is considered the first American avant-garde film.

Your current search criteria is: Keyword is "GZBN".