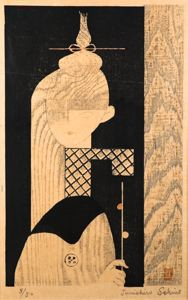 Sekino Junichiro was affiliated with the âFirst Thursday Societyâ of Onchi K?shir?, the founder of the s?saku hanga, or creative print, movement. Like many printmakers of his generation, he was strongly influenced by the work of Munakata Shiko, whose work is also exhibited here. Junichiroâs woodcuts include traditional themes such as the Kabuki theater, portraits of well-known personalities, and a series of the 53 stations of the Taikido Roadâthe same subject and number as those by the legendary Edo printmaker And? Hiroshige.

Junichiro quickly became popular among western collectors after he began to exhibit internationally in 1955. He taught at the Pratt Institute in 1958, and at Oregon State University and the University of Washington in the 1960s. The Plum Girl, titled and signed in English rather than Japanese, probably dates to this period.

Provenance
Carl A. Talbot, Rochester, New York; his gift to the Gallery in 1997
Additional Images Click an image to view a larger version

Exhibition List
This object was included in the following exhibitions:
Portfolio List Click a portfolio name to view all the objects in that portfolio
This object is a member of the following portfolios:
All Graphic Arts
Japanese Art
New Beginnings: Japanese Prints of the 1950s, 60s, and 70s
Relief Prints