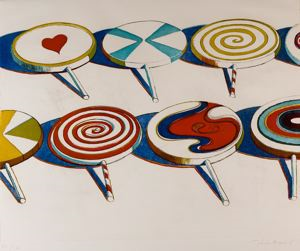 
Wayne Thiebaud's early career in California as a cartoonist and a commercial illustrator influenced his later work. At the age of thirty, he returned to art school and started his notable career as an artist and art professor soon after finishing his Master's degree.

His subject matter more than his artistic style or philosophy has allied him with the Pop Art movement. Thiebaud started painting images of everyday objects, including gumball machines, cakes, sandwiches and candy, in the early 1960s. In 1962, he exhibited at the Allan Stone Gallery and the Sidney Janis Gallery in New York, precisely when Pop Art was taking center stage. While many Pop artists, including Warhol and Lichtenstein, tried to give their work a machine-made look, the hand of the artist remains evident in Thiebaud's work.

Provenance
The artist; William W. Struve, East Haddam, CT; purchased by Anne-Marie Logan, Easton, CT, 1973; given to the Gallery in 1999
Keywords Click a term to view the records with the same keyword
20th century
food
1900-2000
aquatints
Additional Images Click an image to view a larger version