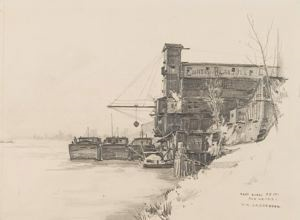 
In the early 20th century, Rochester architect Walter Cassebeer sketched many of the same subjects as Louis Lozowick, Hugh Botts and Ralph Avery, but with a more intimate and delicate hand. Even a grimy operation like the Curtis & Blaisdell coal storage facility, on the East River at 58th St., is poetic when seen through Cassebeerâs eyes.

Walter Cassebeer received his architecture degrees from Columbia University and the Ecole des Beaux-Arts in Paris. After his training in France, he worked for the firm of Everett, Waide, Wells, Bosworth & Platt before returning to practice architecture in Rochester. It is most likely during his tenure with Charles Plattâs firm that he captured these New York vignettes.

In Rochester, Cassebeerâs work can be seen at the Henry Lomb Memorial, in the neighborhood of Upper Falls Boulevard and St. Paul St. Also, his measured drawings of
architectural details of New York State houses can be seen at the Wenrich Library of the Landmark Society.

Provenance
Purchased by Hiram Watson Sibley out of the Rochester Art Club exhibition March 7-April 5, 1914 and donated to the Gallery.
Keywords Click a term to view the records with the same keyword
by Rochester artists
20th century
rivers
boats
East River
Additional Images Click an image to view a larger version

Exhibition List
This object was included in the following exhibitions:
Portfolio List Click a portfolio name to view all the objects in that portfolio
This object is a member of the following portfolios:
1900 - 2000
20th Century American Art
All Graphic Arts
Drawings
New York City
Rochester Artists
Selected Sibley & Watson Family Gifts
Weather & Water