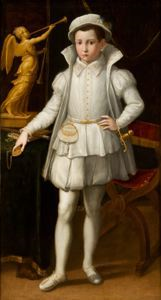 Exhibition List
This object was included in the following exhibitions:
Bibliography
This object has the following bibliographic references:
Portfolio List Click a portfolio name to view all the objects in that portfolio
This object is a member of the following portfolios:
1400 - 1600
All Paintings
Children
Judeo-Christian Art
Lesson Plans Using MAG Objects
MAG Favorites
Music
Objects with Incomplete Nazi-Era Provenance
Objects with Lesson Plans for ELA Standards
Objects with Lesson Plans for SS Standards
Passport to the Past
Portraits
Renaissance Art
Web Links See links to web pages and lesson plans
Passport to the Past A Tour of the Ancient, European and Asian Collections of the Memorial Art Gallery.

Your current search criteria is: Portfolio is "Portraits" and [Object]Century is "16th Century".