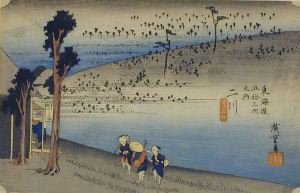 
Full Title:Futakawa from the series "The Fifty-three Stations of the TÃ´kaidÃ´ Road"
Object Type: Print
Medium and Support: Color woodcut
Credit Line: Transfer from the Art Department of the University of Rochester
Accession Number: 1997.112
Link to this object
Location: Not currently on view
Publisher: Takenouchi Magohachi (Hoeido)


The name Futakawa, which means "two rivers," alludes to rivers that form the boundary between two provinces. The desolate plain dotted with sparse vegetation shown here, somewhat softened by mist, was called Sarunobaba, or "The Monkeys' Racecourse." Three blind female musicians known as goze, canes in hand and shamisen on their backs, wait outside the inn at the left. A man who is likely the entertainers' leader is seen standing at the entrance, likely inquiring if entertainment is needed; one of the women has already removed her shamisen from its traveling bag in preparation for playing.

The post-station at Futakawa, near modern Toyohashi, was built in 1600 and remains one of only two of the original TÃ´kaidÃ´ Road post-stations still extant today, the other being at Kusatsu. In this print, the sign outside the inn advertises "famous oat cakes," the traditional food eaten on tango no sekku, the "Boy's Festival," on the fifth day of the fifth lunar month. These advertised oat cakes were more infamous than famous, but as the inn was the only place serving food in an inhospitable locale, business was brisk nonetheless.

Exhibition List
This object was included in the following exhibitions:
Bibliography
This object has the following bibliographic references:
Portfolio List Click a portfolio name to view all the objects in that portfolio
This object is a member of the following portfolios:
Relief Prints
Web Links See links to web pages and lesson plans
Ando Hiroshige: The Fifty-Three Stations Of The Tokaido Road, Hoeido Edition Hiroshige produced many editions of the series 'The Fifty-Three Stations of the Tokaido Road'. The Hoeido edition was published between 1831-1834. This print is number 34 in this edition.