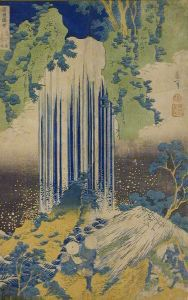 
Full Title:YÃ´rÃ´ Waterfall in Mino Province from the series "A Tour of Japanese Waterfalls"
Object Type: Print
Medium and Support: Color woodcut
Credit Line: Gift of Margaret Sterling in memory of M. Louise Stowell, transfer from the Art Department of the University of Rochester
Accession Number: 1997.108
Link to this object
Location: Not currently on view
Publisher: Eijudo


Legend holds that there was a poor woodcutter in Mino Province during the reign of Empress GenshÃ´ (715-724) who toiled ceaselessly in order to provide his aged father with the sake the father so loved. Returning home wearily after a day of hard labor, he found a gourd floating in the pool at the foot of a waterfall. Cutting it open, the woodcutter found it full of sake; from that day forward, he was able to provide his father with all the sake he desired. The Empress was so impressed by the woodcutter's exemplary filial piety that she appointed him Governor of the province, even changing the name of her reign to "Nourishing Old Age" (YÃ´rÃ´, 717-24). This is how YÃ´rÃ´ waterfall got its name, and it remains a popular tourist destination today.

Hokusai is noted for his fascination with a chemical dye called "Berlin Blue" (Prussian blue) that found its way into Japan from Europe via China in the eighteenth century. In this and other prints he uses it in shades ranging from palest robin's-egg to near-black, the latter contrasting vividly with areas of white. The gnarled pines clinging to inhospitable rocks are a frequent symbol of hardiness in old age.