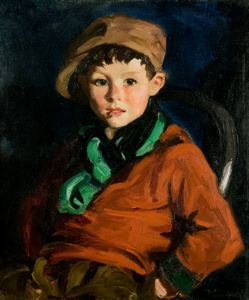 
Robert Henri, the leader of the Urban Realist movement, sought truth in art above all else. Henri promoted this revolutionary idea in support of a uniquely American art.

In addition to providing guidance and inspiration (as well as occasional financial assistance) to many artists, Robert Henri was himself a very fine painter. Wherever he taught, he gathered around him eager and enthusiastic students who benefited from his instruction. He moved to New York in 1900 and taught at William Merritt Chase's school for a few years. In 1909, he established his own school, and also taught painting at the radical Ferrer School established by former Rochesterian Emma Goldman.

Although a member of the National Academy of Design, Henri actively promoted non-juried exhibitions and the work of younger, less traditional artists. Dictums such as "Know what the old masters didâ¦They made their language. You make yours. All the past can help you" gave his followers the confidence to paint in their own way.

During the 1920s, Henri lived in Ireland and painted a young boy named Tom Cafferty, who was the subject of this painting and a number of others. Characteristically, Henri painted him in a very loose and colorful style, with energetic brush strokes.

Provenance
The artist (Macbeth Galleries, NY); purchased by Mrs. Granger A. Hollister from a show of Henri's work at the Memorial Art Gallery in 1926; given to the Gallery in 1926
Keywords Click a term to view the records with the same keyword
20th century
portraits
children
1900-2000
paintings
Additional Images Click an image to view a larger version

Exhibition List
This object was included in the following exhibitions:
Bibliography
This object has the following bibliographic references:
Portfolio List Click a portfolio name to view all the objects in that portfolio
This object is a member of the following portfolios:
1900 - 2000
20th Century American Art
All Paintings
Ashcan School
Children
Many Faces, Many Places
Portraits

Your current search criteria is: Portfolio is "Many Faces, Many Places" and [Object]Object Type is "Painting".