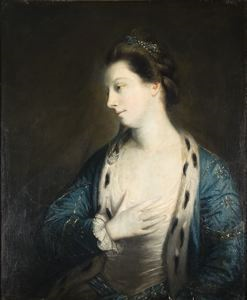 
Sir Joshua Reynolds, the foremost portraitist in 18th-century England, painted members of the aristocracy as well as the newly-rich mercantile class. The first president of the Royal Academy in London, he did more than anyone to raise the status of art and artists in Britain. Reynolds.

The information attached to this painting when it entered MAGâs collection in 1930 identified the sitter only as Mrs. Thomas Orby Hunter, wife of an important Member of Parliament and a Lord of the Admiralty. Orby Hunter lost his first two wives to early deaths, probably in childbirth. Based on stylistic grounds that suggest a date of the late 1750s, we speculate that the sitter is Thomas Orby Hunterâs third wife, Marion Cunningham, whom he married after his second wifeâs death in June of 1756.