The First Whisper of Love 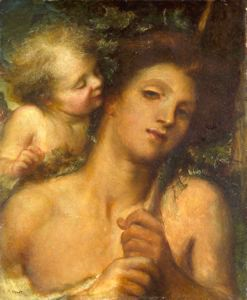 The First Whisper of Love


As a young man, George Frederick Watts briefly studied at the Royal Academy, and he was a friend and peer of both academic and Pre-Raphaelite artists, but his brushwork was looser than that utilized by either of those schools, and his subject matter generally more mystical than literary or historical. Here, Cupid distracts a youth holding a bow by whispering in his ear. It was not uncommon for Watts to paint multiple versions of a composition, and this is one of four versions of this painting. As early as 1844, the artist gave sketches of the composition to a sweetheart, but the degree of finish to this canvas suggests a date later in his career. Watts was known to rework his paintings over a long period of time, so it may have been started in the 1840s and not considered finished for many years. An intriguing comparison is an 1865 portrait of the artist taken by famed Victorian photographer Julia Margaret Cameron: Whisper of the Muse depicts a similar scene, with a youthful muse providing inspiration to Watts, who poses as a musician.

Provenance
Probably purchased from the artist by Henry Austin Bruce, 1st Baron Aberdare of Duffryn (1815-1895), Glamorgan, Wales; Parke-Bernet, NY, ca. 1962; purchased there by Dr. Robert F. Metzdorf (1912-1975), New York; his gift to the Gallery in 1968
Keywords Click a term to view the records with the same keyword
European art
Additional Images Click an image to view a larger version

Your current search criteria is: Object is "The First Whisper of Love".