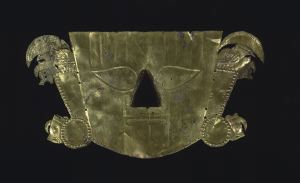 
This Burial Mask was created by a Chimu artist in the Chicama Valley on the North Coast of Peru between 1100 and 1470. Ruling from their capital city of Chan Chan, the ChimÃº state controlled a vast empire in the north and central coasts of Peru. They employed tens of thousands of artists, including skilled metalworkers that produced objects of precious metal for the nobility.

Masks such as this would never have been worn by the living. They played an essential role in death and burial and were placed on the funerary bundle. These decorative masks helped indicate the rank of the deceased.

The ornate, circular ear ornaments may have held actual feathers. The upper portion of the mask is decorated with puma heads and bent, stylized figures of warriors wearing elaborate feathered headdresses. Separate ornaments may have been attached to the mask near the eyes, around the nose and along the side of the face. The nose, which was raised in relief, has been lost.
[Gallery label text, 2009]

Exhibition List
This object was included in the following exhibitions:
Bibliography
This object has the following bibliographic references:
Portfolio List Click a portfolio name to view all the objects in that portfolio
This object is a member of the following portfolios:
1000-1400
1400 - 1600
Acquisitions from the R. T. Miller, Jr. Fund
Ancient Americas
Lesson Plans Using MAG Objects
Metalwork
Objects with Lesson Plans for SS Standards
Selected Work Purchased with Funds from R.T. Miller, Jr.
Web Links See links to web pages and lesson plans
Chimu Burial Mask Discussion questions, additional information for teachers to share with children, and a bibliography.
Rochester Democrat and Chronicle March 4, 1947, showing Baron Wolfram von Schoeler speaking about the Ancient Art of Peru and this mask, at Memorial Art Gallery.

Your current search criteria is: Object is "Burial Mask".