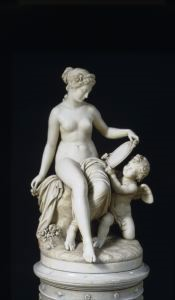 
When Rochester businessman and art collector Daniel Powers brought this piece home from the Centennial Exposition in Philadelphia in 1876, it made local headlines. One newspaper article admired its âgrace and life-likeness rarely met with in modern composition.â The sculpture was on view at Powersâ own gallery downtown for many years, for an admission charge of $.25. Cantalamessa-Papotti also made a portrait of Powers and the monuments for the families of Rochester nurserymen Ellwanger and Barry, at Mt. Hope and Holy Sepulchre cemeteries.

Interpretations of the figures vary: the Powers Gallery catalogue identified the subject as Cupid giving a girl her first lesson in love by means of a mirror, but the figures may in fact be Cupid with his mother Venus, who is often shown holding a mirror. Mythological and allegorical characters were beloved of academic artists, who could illustrate an abstract quality such as vanity while demonstrating their prowess at depicting the human figure.

Provenance
Purchased by D.W. Powers from the Centennial Exposition, 1876.
Keywords Click a term to view the records with the same keyword
from Rochester collections
19th century
Cupid
Roman
1800-1900
sculpture
Additional Images Click an image to view a larger version

Your current search criteria is: Object is "Love's Mirror".