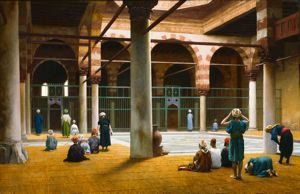 
An enthusiastic amateur archaeologist, GÃ©rÃ´me painted dozens of Eastern scenes over his long career, including a number of mosque interiors. Although the mosque seen here has not been identified, the artist was known to have travelled in Asia Minor, the Middle East, and North Africa, and it is believed that this elaborate interior is a composite, made up of details from a number of specific sites. The worshippers assume accurate postures for their devotions, from the initial upright recitation of vows to the final prostration before God.

GÃ©rÃ´me was a firm proponent of the Academic style: he taught at the Ecole des Beaux-Arts in Paris, and won national honors and the patronage of royalty. Although his pupils had included icons of modernism such as Fernand Leger and Everett Shinn, GÃ©rÃ´me was initially opposed to any challenges to the supremacy of the Academy. In the face of increasing opposition to his conservative viewpoint, he declared that the work of the Impressionists was âinsipid and badly executed.â

Marks
Backing board. Back of canvas not seen 7/08.

Provenance
Hiram W. Sibley (1845-1932), New York and Rochester; by descent to his son, F. Harper Sibley, and his wife; their gift to the Gallery in 1957
Keywords Click a term to view the records with the same keyword
from Rochester collections
19th century
mosques
1800-1900
paintings
Orientalism
Additional Images Click an image to view a larger version

Exhibition List
This object was included in the following exhibitions:
Bibliography
This object has the following bibliographic references:
Portfolio List Click a portfolio name to view all the objects in that portfolio
This object is a member of the following portfolios:
1800 - 1900
19th Century European Art
All Paintings
Architecture
From Rochester Collections
MAG Favorites
Web Links See links to web pages and lesson plans
MAGexplore MAGexplore provides in-depth information and close looking at over 200 objects in MAG's collection.

Your current search criteria is: Object is "Interior of a Mosque".